A new report suggests that humanity has depleted Earth’s natural resources just over half-a-year into 2018, marking a day known as “Earth Overshoot Day.” Animal agriculture and our meat consumption lead the list for resource depletion.

According to the data, 86 percent of nations are living beyond their means, meaning that humans have caused an “ecological deficit.” Collectively, humanity is using resources 1.7 times faster than what the planet can regenerate in a year.

What is Earth Overshoot Day?

Earth Overshoot Day was created by the Global Footprint Network (GFN), an independent think tank that provides research as well as insights into natural resource consumption and tools for making informed, sustainable decisions. Resources accounted for include forests, global fish stocks, fresh water, biodiversity loss, the buildup of carbon dioxide in the atmosphere, and more.

“As we mark Earth Overshoot Day, today may seem no different from yesterday—you still have the same food in your refrigerator,” said GFN CEO Mathis Wackernagel. “But fires are raging in the Western United States and in Cape Town, South Africa, residents have had to slash water consumption in half since 2015. These are consequences of busting the ecological budget of our one and only planet.” 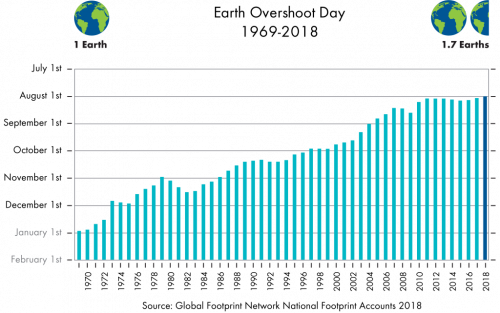 In order to determine when Earth Overshoot Day is each year, GFN first calculates the number of days in the year that the planet’s biocapacity can sustain “humanity’s ecological footprint.” Once the date in which humans have used Earth’s resources to full capacity, all dates going forward are considered “global overshoot.”

The exact Earth Overshoot Day is then figured by “dividing the planet’s biocapacity (the amount of ecological resources Earth is able to generate that year), by humanity’s Ecological Footprint (humanity’s demand for that year), and multiplying by 365, the number of days in a year.” Quartz equates it to “drawing down capital rather than living off interest.” The calculations are based on United Nation data sets from 1961 to 2014 as well as recent scientific research. GFN notes that it is not possible to verify the precision of all of the underlying data.

If We all lived like the U.S., we would need 5 Earths 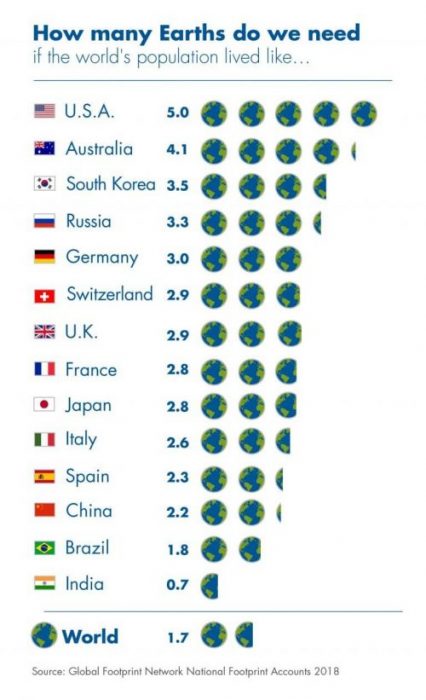 Additionally, a chart released by the GFN shows how many planets we would need if the world’s population lived the same lifestyle as a specific country. The United States topped the chart, requiring five Earths to sustain the global population. Australia ranked right below with 4.1 needed, followed by South Korea, Russia, and Germany. India was at the bottom of the list, theoretically needing only 0.7 Earths in order to sustain its lifestyle.

How to be more sustainable

While the implication of Earth Overshoot Date is dismal, the GFN provides multiple, actionable ways that individuals can live a more sustainable lifestyle. Actions include participating in trash clean-ups, living a more minimalist lifestyle, sharing rides or biking rather than driving a car, and replacing meat, dairy, and eggs with plant-based foods. According to recent research, adopting a vegan diet is the most effective way to combat climate change and thus reduce carbon emissions that play a role in the depletion of Earth’s natural resources.