WeWork, a modern communal workspace and office rental company, recently sent a cafeteria update to all of its employees worldwide. Following a core team meeting, WeWork has decided to ban red meat, pork and poultry from company events.

“We believe in action,” the email stated, “and that by testing and learning we can pioneer new ways for companies to create positive impact – from our refugee initiative, to working with veterans, to new commitments toward sustainability.”

This decision is a positive step toward sustainability and environmental conservation, as the production of meat takes a significant toll on the earth’s limited natural resources. The email listed several facts, stating, “Meat and dairy are 18 percent of calories and 37 percent of protein worldwide, but use 80 percent of farmland and produce 60 percent of agriculture’s greenhouse emissions.”

Further, according to the environmental documentary, Cowspiracy, 1.5 acres of land can produce 37,000 pounds of plant-based food, whereas the same amount of land will only produce 375 pounds of beef. 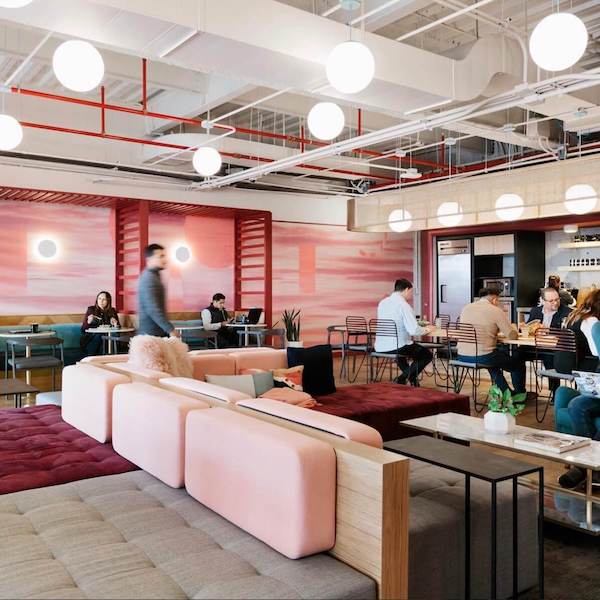 WeWork’s email noted that it has already seen “incredible enthusiasm” regarding the change. The company informed its employees that this move “is an opportunity to learn more about healthy, sustainable and globally conscious living, to make informed choices and to ultimately offer our community a chance to join us on the journey.”

The company will still offer fish, and it has not completely banned meat from the premises – staff and members are allowed to bring their own lunches and eat as they please. However, this new policy will prohibit any event hosted with a WeWork budget from providing red meat, pork, and poultry. This includes the company’s largest annual event, Summer Camp. With 6,000 employees, WeWork estimates that it will save approximately 10,000 animals by not serving meat at this three-day event.

Other corporations and public entities are also implementing similar initiatives. Most recently, Costco announced that it plans to discontinue its Polish hot dog to make room for more plant-based options. Earlier this year, two children’s hospitals in the US also removed hot dogs from their patient cafeteria menus. Even KFC is looking to reduce its overall calorie production, offering healthier sides in its UK locations and working on a vegetarian chicken option.

As the consumer marketplace continues to evolve in the plant-based direction, the workplace has followed suit. Forbes just released an article explaining the plant-based phenomena that is sweeping cubicles worldwide, and WeWork is taking its place as a leader in the movement of sustainability, health, and innovation.