“Adding fun flavors of spirits to ice cream was an idea that couldn’t be topped — until we made it non-dairy and gluten-free,” Whole Foods announced on its website. The three new flavors, which are part of the chain’s more affordable 365 Everyday Value private label, include Salted Pecan Bourbon, Irish Whiskey Salted Caramel, and Cherry Bourbon. Despite the names, the flavors don’t contain alcohol.

According to Cooking Light, Whole Foods’ seasonal food line includes an array of other products, including a Peppermint and Quinoa Dark Chocolate Bark and other snacks. 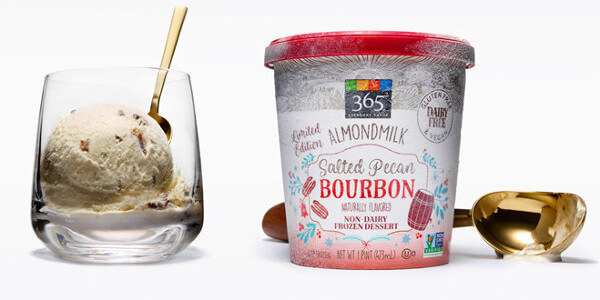 While Whole Foods has offered dairy-free ice cream options from well-known brands like So Delicious and smaller, independent companies like the Texas-based Nada Moo!, it wasn’t until last March that the grocery store launched its almond milk ice cream line. The move to make its own vegan ice cream comes at a time when more Americans than ever are making a conscious effort to purchase plant-based products from stores.

This year isn’t the first time that Whole Foods has collaborated with an esteemed chef for its plant-based Thanksgiving meal. Last year, it partnered with James Beard Award-nominated chefs and vegan restaurateurs, Rich Landau and Kate Jacoby, to develop a vegan holiday menu.

“Seasonal flavors are having their moment. And then they’re gone,” added the website, hinting that those looking to grab a pint or two of each flavor for themselves should act fast.