Animal rights activist and former CNN host Jane Velez-Mitchell recently visited what could be the best pizzeria in L.A. for vegans  – Cruzer Pizza.

In a video as part of the Jane UnChained video series, #LunchBreakLive, viewers are shown how to make a “spectacular vegan pizza”, with Daiya’s vegan cheese, courtesy of the folks at Cruzer Pizza.

Jane, who is a vegan herself, calls this episode a “very special Lunch Break Live“, before adding “here we are learning from master chefs Sami and Spencer, how to make incredible vegan food.” The CNN and FOX News reporter exclaims “look at that!” as she casts the camera upon a vegan ‘phillysteak’ – made from vegan ‘beef strips’, mushrooms, onions, green bell peppers and Daiya cheese, sandwiched in-between a small baguette. 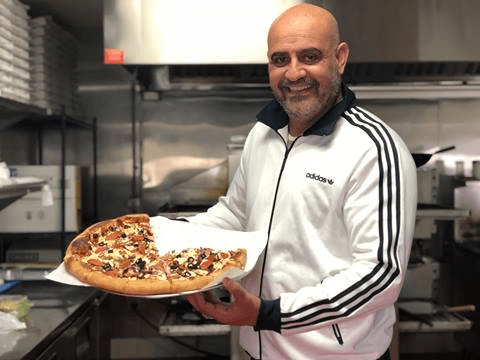 Cruzer use nut-free cheese and offers gluten-free crusts as well for customers with allergies or other dietary restrictions.

Cruzer did not start out as a fully vegan pizzeria, instead it instead accidentally evolved into a fully vegan eatery over time, as the vegan options were extremely popular and there was no other completely vegan pizzeria in the neighborhood of Los Feliz. The staff said they love the vegan community, their “lovely customers” and they love the animals – the owner, Sami is vegan himself.

Velez-Mitchell buzzes about the food being made, even saying she is “blown away” and “you couldn’t get better than that”.

Cruzer’s impressive menu has everything you’d find on a regular pizzeria menu (Hawaiian, BBQ, Chicken, Margarita etc) – and more. Gourmet pizzas, salads and appetizers, pasta dishes, and sandwiches can also be found. For those itching to get their hands on a Cruzer vegan pizza for themselves – a new location is opening soon on the West Side.