A new study published in the journal Geophysical Research Letters has revealed the presence of a massive ocean dead zone, an area of the ocean made uninhabitable due to a lack of oxygen, located in the Gulf of Oman part of the Arabian Sea. While the Gulf of Oman area was already known to have depleted oxygen levels based on research conducted in the 1990s, ongoing research has been difficult due to geopolitical issues and the threat of piracy.

Over the course of eight months, researchers from the University of East Anglia (UEA) collected data on the Gulf’s oxygen levels using underwater robots called “Seagliders.” At the end of the study, researchers found the results to be much worse than expected. Through their findings, researchers discovered an ocean dead zone in the Gulf of Oman larger than Scotland that is completely depleted of oxygen, making it the world’s largest-known dead zone. Previously, the National Oceanic and Atmospheric Administration (NOAA) stated that the biggest ocean dead zone in the world was documented in the Gulf of Mexico. 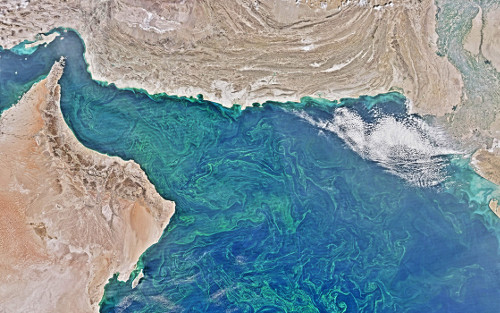 “Our research shows that the situation is actually worse than feared–and that the area of dead zone is vast and growing. The ocean is suffocating,”study lead author Dr. Bastien Queste, a marine biogeochemist and research fellow at UEA’s  School of Environmental Sciences, said in a press release. “All fish, marine plants and other animals need oxygen, so they can’t survive there.”

“[Ocean dead zones] are a disaster waiting to happen,” Queste said,“made worse by climate change, as warmer waters hold less oxygen, and by fertiliser and sewage running off the land into the seas.”

Climate change may make the situation worse, but NOAA (National Oceanic Service) points to human activity as one of the key drivers of this environmental issue, highlighting “excess nutrients” that run off land used to raise livestock and into waterways. When mass amounts of nutrients enter waterways, it can stimulate algae blooms, which decompose in the water and deplete the oxygen supply of the local marine life, eventually disrupting the ecosystem as creatures are affected by hypoxia. In a report released last year by global environmental campaign Mighty, fertilizer pollution linked to animal agriculture was listed as the leading cause of dead zones. According to the study, an overwhelming amount of fertilizer pollution comes from feed facilities and meat processing facilities owned by meat processing giants, Tyson and Cargill.

While the UEA study does not offer any solutions, reducing consumption of meat and dairy products may help to combat ocean dead zones, among many other environmental issues.