For those with a sweet tooth, Zizzi also introduced a Vegan Caramelized Biscuit Cheesecake served on a cinnamon biscuit base with crushed honey-less honeycomb. 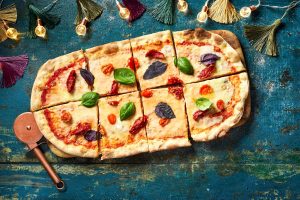 Zizzi’s continued efforts in offering more vegan options seem to be paying off for the company. In November 2017, the chain reported that sales of its vegan pizza had doubled in 12 months, whilst overall sales of plant-based food had risen by 246 percent.

Earlier this month, coinciding with the holiday season Zizzi released its first-ever holiday commercial starring a vegan Santa. The clip sees a plant-based Saint Nick tucking into a serving of vegan pasta. Speaking about the ad, a Zizzi spokesperson said that the brand wanted to ensure that the growing number of those choosing to ditch animal products could “enjoy good food and good times with friends and family without missing out on tasty festive dishes.”

Zizzi added that its menus include more plant-based options “than ever before” because the company had expected a “considerable increase in vegan diners.” It also aimed to appeal to those looking to eat more plant-forward foods as well as those with allergies.

Zizzi’s prediction lines up with research from leading UK supermarket chain Tesco that found that more than 520,000 Brits will enjoy vegan and vegetarian meals this Christmas. One in 12 families will eat a meat-free main for their festive feast; meanwhile, Tesco saw sales of certain meat products decline.

The figures align with the growing number of people in the UK choosing to leave animal products out of their diet all year round. Earlier this year, it was reported that rates of veganism in the UK had increased by 700 percent in just two years.